Copycat (girlfriend) marks the return for Australian songstress Melissa James, who had a hit single and top 20 in the ARIA dance charts in the 1990s with the track 'Baby Come Back'.

After launching the single, Copycat (girlfriend) live at The Vineyard, St Kilda in August  this year, Melissa has released the music video.

So let’s back up a bit for those who missed this strong pop-rock single. While the title ‘Copycat (girlfriend)” may prepare you for something you expect to hear on a teen movie, don’t be fooled by the cute title. There’s a Divinyls / Baby Animals edge to the song that aims to encourage and inspire young adults to embrace one’s natural physical features and not a “copy” of someone else.

“I hear it every day with teens wanting blonde hair and blue eyes because that’s what they’ve been told is the ideal beauty,” says Melissa.  “But this is so wrong. You can be beautiful with brown eyes and brown hair.  This is what my song is about.. .believing in yourself.”


You fake it all the time
Is that my dress you're wearing tonight?
Your makeup looks like mine
You just want to be me all the time

Copycat (Girlfriend) was created by band member, Shane Ryall. He was inspired by a conversation he was having with his music students. They all wanted to be someone else and as the conversation went further it triggered the disturbing realisation that young teenagers are both susceptible and conditioned to what other people do. He knew that if society didn’t start teaching them to love themselves and stop trying to be a copy of someone else, they will grow up to be very unhappy adults. Shane later discussed this with Melissa who could relate to the teenagers after spending most of her childhood trying to be someone else, which created identity issues and low self-esteem.

“I felt uncomfortable and had very low self-esteem about it,” says Melissa. “I would rather not go out and stay in my bedroom where I was most comfortable.”

When Melissa was scheduled to write another song with Shane, it became instinctively obvious to them what their next song should be about. The music to Copycat (Girlfriend) came first and the lyrics followed. The music video was choreographed and produced by Melissa and focuses on the insecurity and uncertainty of a girl not knowing who she is. She sits alone in black holding up a wardrobe of fragmented clothing to her body but nothing suits her. The awkwardness of failed attempts and jerking movements as she sings the chorus really brings the message home that none of these “looks” suits her because they are not her own. 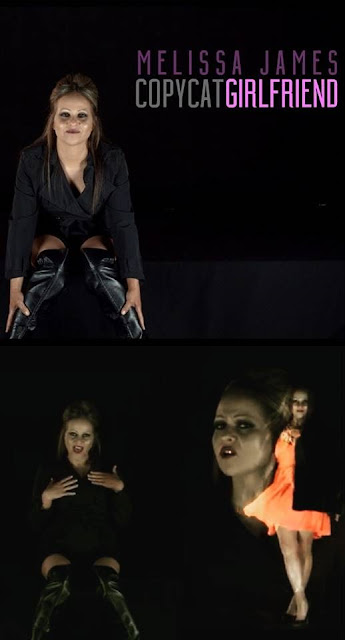 “We are rapt that the music and sounds have an “in your face” pop element,” says Melissa. “It has lavish vocals with stripped back guitar keeping it a radio friendly pop tune.”

The captivating new single 'Copycat (girlfriend) is available to purchase now on iTunes, Google Play, and for streaming on Spotify and other services. The single includes an instrumental and acapella version of the track, and is available now.
Posted by Unknown at 02:02

Find me on GooglePlay

Find me on iTunes